Xavier Durand, Coface’s Chief Executive Officer, commented:
“Coface continued to deliver solid operating performance in an environment of strong economic recovery, despite the lingering pandemic. The risk environment is continuing to normalize, with very different situations according to country, or sector of activity.
Coface’s results reflect substantial reserve releases tied to low loss experience, a large part of which is paid back to the governments that implemented public reinsurance schemes. These schemes reduced Coface’s pre-tax profit by €160m in 2021. Coface anticipates that these schemes will have much less of an impact in 2022.
Coface is continuing to implement its Build to Lead strategic plan, whose relevance has been proven by the group’s recent performance in a very atypical environment and the strong growth in its adjacencies. Growth in information services alone reached 18%, and 30% in the fourth quarter. As such, Coface is continuing to develop its global information infrastructure by drawing on its expertise and the depth of its database.
Finally, given the strength of the balance sheet, and in accordance with our capital management policy, we will propose, during the Shareholders’ Meeting, the distribution of a dividend of €1.50 per share, which corresponds to a 100% pay-out ratio.”

1 Return on average tangible equity.
2 This estimated solvency ratio is a preliminary calculation made according to Coface’s interpretation of Solvency II regulations and using the Partial Internal Model. The final calculation may differ from this preliminary calculation. The estimated solvency ratio is not audited.
3 The distribution proposal will be submitted to the Annual General Shareholders' Meeting to be held on 17 May 2022. 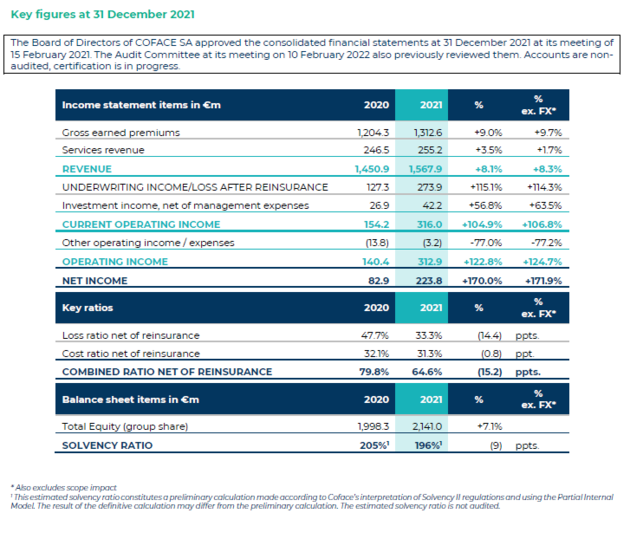 In 2021, Coface recorded a consolidated turnover of €1,567.9m, up +8.3% compared to 2020, at constant FX and perimeter. On a reported basis (at current FX and perimeter), turnover was up +8.1%, due to slightly negative currency effects.
Revenues from insurance activities (including bonding and Single Risk) increased by +9.7% at constant FX and perimeter (and by +9.0% at current FX). Growth benefited from a catch-up effect after a year characterised by lockdowns in 2020. Over the 2019 2021 period, average annual growth came out to +3.1% on a reported basis.
The retention rate declined slightly to 91.7% from last year’s record level (91.9%). New business stood at €129m, down compared to the previous year (€138m in 2020).
The growth in Coface’s client activities had a positive impact of +8.4% during 2021. This sharp growth reflects the scale of the economic recovery and the rise in the cost of commodities. The price effect remained positive for the year as a whole (+0.7%) but has been negative for the past three quarters in a more competitive market (-2.2% cumulative).
Revenues from other activities were up +1.7% compared to 2020, with contrasting trends. Turnover from factoring rose +10.7% with an increase in volumes refinanced. Revenues from information services increased by +18.1% (and by +30.5% in Q4-2021). Fee and commission income (collection fees) was impacted by the decline in claims to be recovered and dropped -24.1%, while commissions were down slightly by -4.1%.

In Northern Europe, turnover increased by +9.4% at constant FX and perimeter (+11.4% at current FX). Trade credit insurance benefited from the recovery in customer activity and a good level of new business, while factoring turnover increased by +8.1% on the back of the recovery in demand for corporate financing.
In Western Europe, turnover was up by +8.2% at constant FX (+8.5% at current FX) thanks to the impact of improved pricing and a high retention rate, which were partially offset by premium refunds.
In Central and Eastern Europe, turnover was up by +8.1% and by +9.2% at constant FX, mainly due to growth in trade credit insurance driven by customer activity and high retention. Like in Germany, factoring rose (+24%).
In Mediterranean and Africa, a region driven by Italy and Spain, turnover grew by +9.4% and by +8.7% at current FX. This was due to the recovery of activity, high levels of new business and expansion in services.

(i)   Loss ratio
The gross loss ratio for 2021 was 21.4%, an improvement of 30.4 ppts. compared to the previous year. The gross loss ratio for Q4-2021 was 10.5%, reflecting a further improvement on the previous quarter (16.9% in Q3-2021).
The Group’s reserving policy remains unchanged. The provisioning level for the underwriting year stood at 66.5%, lower than the historical average, which reflects the expectation that loss experience will remain moderate. Recoveries came out at 47.7%, a very high level by historical standards, reflecting the prior very low loss experience.
The loss ratio net of reinsurance improved by 14.4 points to 33.3%. This improvement was much lower than the gross ratio, due to the impact of government risk-sharing schemes, which are now in the latter stages of being run off. These schemes have received no premiums since 1 July 2021, but are seeing a positive trend in terms of loss experience. Excluding government schemes, the net loss ratio would have been 23.2%.

(ii)  Cost ratio
Coface is following its strict policy of cost management while continuing to invest. Over 2021, Coface maintained its discipline, with costs growing by +7.1% at constant FX and perimeter, and +7.0% at current FX. This increase in costs is lower than the growth in turnover. The gross reinsurance cost ratio was 33.1%, an improvement of 0.6 ppt over one year.
The cost ratio, net of reinsurance, was 31.3% in 2021, representing an improvement of 0.8 ppt year-on-year, thanks to strict cost controls.

Financial result
Net financial income for 2021 was €42.2m, up by €15.3m compared to the previous year. This figure includes €3.6m in capital gains, mostly from real estate funds, and a positive FX impact of €7m.
Financial income excluding capital gains increased very slightly to €33.1m (from €32.9m) despite the ongoing low-rate environment, as Coface continues to redeploy its liquidity surplus, which has been strengthened by solid cash flows from operating activities.

Operating income and net income
Operating income for 2021 was €316.0m, more than double compared to the previous year, mainly due to the improvement in the loss ratio.
The effective tax rate was 23%, compared to 37% in 2020.
In total, net income (group share) stood at €223.8m, up +170% compared to 2020, €32.9m of which was generated in Q4-2021. This record level can be explained in part by the very atypical nature of the last two years, which have seen a very significant involvement of the States in the management of the economy.

From a public health standpoint, the end of 2021 was characterised by the emergence of the highly contagious Omicron variant. High vaccination rates in most countries as well as the authorities’ and corporates’ ability to adapt limited the economic impact.
In geopolitical terms, a new cycle of tension appears to be dawning in several regions (Taiwan, Ukraine, Africa). Coface is closely monitoring any developments in these potential crises.
Rising commodity prices, pressure on numerous supply chains and unemployment back at all-time lows in several countries have reignited the debate over inflation, leading central banks to start normalising their monetary policy, especially in the United States. The sharp rise in energy prices, especially in Europe, has caused difficulties for a number of electricity distributors and for certain end clients.
Against this backdrop, the number of bankruptcies has continued to rise, and has even reached 2019 levels in some countries (Spain, United Kingdom). In contrast, other countries (France, Germany) are continuing to see very low bankruptcy levels.
Coface believes that it has recognised a large majority of the accounting expense associated with the government schemes. As a result, the negative impact of these schemes on earnings should reduce significantly in 2022.
Coface is confirming the relevance of its Build to Lead strategy and is continuing to invest, both in the core trade credit insurance business and in its adjacencies, especially in information services where the strong growth generated (+18% in 2021) is a testament to the appropriateness of the group’s multi-year investment strategy.