In 2019, Poland will likely experience a slight slowdown in economic growth after two years of accelerating activity, with GDP growth rates reaching their highest levels since 2011. Household consumption remains the main growth driver, thanks to the buoyant labour market. The unemployment rate is the lowest in 28 years, wages are set to keep growing at fair rates, the central bank’s rate is at its lowest point in history, and consumer sentiment indicators remain high. Moreover, a rebound of fixed asset investments brings additional support for growth. Investments are still supported by an inflow of EU funds, which have enhanced investments by at least 2 percentage points. Nevertheless, growth of domestic activity will stabilise, and the trade balance is likely to be negative in light of the weaker economic expansion of eurozone (the main trading partner) – exports represent over 50% of GDP. This will lead to the Polish economy being less robust in 2019.

Although the labour market situation is beneficial for households, companies have perceived it as a constraint. Labour shortages have become a drag in current business activity and its further expansion, and have been reported by an increasing number of companies across all sectors. A lack of workforce is especially evident in the manufacturing, construction and transport sectors. In addition, the insolvency law enacted in 2016 has favoured the increase in business restructuration proceedings, which have accelerated since then.

The general government deficit remains on a decreasing path: it is estimated to have reached 0.9% of GDP in 2018 after recording 1.4% in 2017. Costly social measures – such as child benefits and the lowering of the statutory retirement age in 2017 – have been offset by the robust macroeconomic performance, which brought an increase of revenues from personal and corporate income taxes (the structural deficit, i.e. excluding effect from the cycle amounted to 2.0% of GDP, according to the European Commission’s estimation). The improved tax collection has brought sizeable and positive effects to the Polish budget balance, as further such measures will likely do in 2019. The favourable labour market contributes to strong growth of social contributions. Public investment expenditure will continue to grow as Poland hosts a series of elections: municipal in late 2018, domestic and European parliamentary in 2019, and presidential in 2020. The public debt is expected to remain on a manageable level, benefitting from a low budget deficit and the relatively solid GDP growth of Polish economy.

The current account balance turned slightly negative in 2018. Whereas trade in services continues to perform well supported by transportation services abroad, trade in goods is affected by solid demand from Polish households and companies importing for improving their production capacities. Indeed, imports have been more dynamics than exports: in the first nine months of 2018, exports increased by 3.8% compared to the same period of previous year whereas imports surged by 6.8%then.

The conservative Law and Justice (PiS) party won a majority of seats in the Sejm (the lower house of Polish Parliament) in the latest legislative elections in October 2015 (37.6% of votes), ahead of Civic Platform, the main opposition party. Since taking office, the PiS has conducted a series of disputable reforms that have undermined the country's democratic institutions and worsened the relationship with the EU. The European Commission has triggered Article 7 of the Union Treaty, which could provide for the suspension of certain rights, including the right to vote, in case of a clear risk of serious violation of the rule of law. Such actions have also generated social discontent within segments of the population, and have polarized public opinion. In the latest municipal elections in October 2018, the PiS increased its hold on regional parliaments, but failed to win mayoral contests in most of the country’s largest cities.

Although the current government has successfully achieved a higher collectability of taxes and is enjoying a favourable macroeconomic environment, the political climate is relatively gloomy. This has contributed to a higher level of uncertainty compared to previous years, and has also affected investors’ attitudes. On the other hand, stable fundamentals, Poland’s integration into Western European value chains, and attractive yields have convinced foreign entities to not withdraw their direct and portfolio investments from Poland. 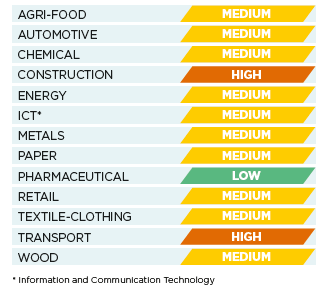 Standard bills of exchange and cheques are not widely used, as they must meet a number of formal issuing requirements in order to be valid. Nevertheless, for dishonoured or contested bills and cheques, creditors may resort to fast-track procedures resulting in an injunction to pay. There is, however, one type of bill of exchange that is commonly used – the weksel in blanco. This is an incomplete promissory note bearing only the term “weksel” and the issuer’s signature at the time of issue. The signature constitutes an irrevocable promise to pay, and this undertaking is enforceable upon completion of the promissory note (with the amount, place, and date of payment), in accordance with a prior agreement made between the issuer and the beneficiary. Weksels in blanco are widely used as they also constitute a guarantee of payment in commercial agreements and the rescheduling of payments.

Cash payments were commonly used in Poland by individuals and firms alike, but under the 2004 Freedom of Business Activity Act (Ustawa o swobodzie działalności gospodarczej), companies are required to make settlements via bank accounts for any transaction exceeding the equivalent in Polish złotys of €15,000, even when payable in several instalments. This measure has been introduced to combat fraudulent money laundering.

Amicable debt collection is the first step of the debt recovery procedure in Poland. These actions include reminders and/or demands for payment. These communications usually serve to obtain repayment of outstanding debt, to warn the debtor of further official actions, to obtain acknowledgment of the debt, to conclude an agreement between the creditor and the debtor based on the acknowledgment of its debt and to obtain a commitment to the repayment agreed.

As of 2004, interest can be claimed as from the 31st day following delivery of the product or service, even where the parties have agreed to longer payment terms. The legal interest rate will apply from the 31st day until the contractual payment date. Thereafter, in the case of late payments, the tax penalty rate will apply. This is very often greater than the legal interest rate, unless the contracting parties have agreed on a higher interest rate.

A bill to implement the 2011/7/EU directive of 2011 on “combating late payment in commercial transactions” provides the contracting parties with maximum payment terms of 60 days. Similarly, default interest is due the day after the deadline, without the need for a formal notice. By implementing the EU Directive, Poland introduced new rules regarding compensation for payment defaults in commercial transactions. These rules oblige debtors to pay the costs of recovery when the payment term expires. The defined amount is a lump sum of €40 – but it is possible to demand a larger amount if the costs of recovery prove to be higher.

Creditors can seek an injunction to pay (nakaz zaplaty) via a fast-track and less expensive procedure, provided they can produce positive proof of debt (such as unpaid bills of exchange, unpaid cheques, weksels in blanco, or other acknowledgements of debt). If the judge is not convinced of the substance of the claim – a decision he alone is empowered to make – he may refer the case to full trial.

As since 2010, the district court of Lublin has jurisdiction throughout Poland to handle electronic injunctions to pay when claims are indisputable. The clerk of the court examines the merits of the application, to which is attached the list of the available evidence. He then, using an electronic signature, validates the ruling granting the injunction to pay. This procedure appears, at first glance, to be fast, economic and flexible, but in reality the sheer number of cases mean that this process can be slow and drawn out.

Ordinary proceedings are partly written and partly oral. The parties file submissions accompanied by all supporting case documents (original or certified copies). Oral pleadings, with the litigants, their lawyers, and their witnesses are heard on the main hearing date. During these proceedings the judge is required to attempt conciliation between the parties.

Standard court procedures can be also fast and effective when the creditor can provide documents that clearly show the amount of debt and the confirmation of delivery of goods (or proper performance of services), especially if the documents have been signed by the debtor. The court issues an order for payment which states that the debtor should pay the amount of the debt in two weeks, or return a written argument within the same period of time. However, in standard procedures, it is quite easy for the defendant to postpone the case. When the defendant argues the order of payment during this kind of procedure, it can take a long time to obtain the final verdict, due to the lack of judges and large backlog of cases.

Enforcement of a legal decision

When all appeal venues have been exhausted, a judgment becomes final and enforceable. If the debtor does not comply with the judgment, the creditor can request that the court orders a compulsory enforcement mechanism of the decision, through a bailiff. For foreign awards rendered in an EU country, specific enforcement mechanisms such as the EU Payment order or the European Enforcement Order can be used for undisputed claims. Awards rendered in non-EU countries are recognised and enforced, provided that the issuing country is party to a bilateral or multilateral agreement with Poland.

The 2015 reform on polish insolvency law introduced four new types of restructuring proceedings which aim to avoid the bankruptcy of insolvent or distressed businesses.

The “arrangement approval proceedings” is available to debtors who are able to reach an arrangement with the majority of creditors without court involvement and where the sum of the disputed debt does not exceed 15% of total claims. The debtor will continue to manage its estate but it will be required to appoint a supervisor, who will prepare a restructuring plan. The creditors approve the proposal through a vote.

Accelerated arrangement proceedings are also available if the sum of the disputed debt does not exceed 15% of total claims. The procedure is simplified in relation to the allowance of claims carrying voting rights. Creditors can only make reservations via a list of claims prepared by the court supervisor or administrator. The debtor’s estate will continue to be managed by the debtor-in-possession, but a court supervisor will be appointed to supervise its management.

The “standards arrangement” proceeding is available for disputed debts exceeding 15% of the total claim. With these proceedings, the court secures the debtor’s estate by appointing a temporary court supervisor.

“Remedial” proceedings offer the broadest restructuring options and scope of protection of the debtor’s assets against creditors. The appointment of an administrator to manage the debtor’s estate is mandatory.

Bankruptcy proceedings can only be declared when a debtor has become “insolvent”. There are two test of insolvency – the liquidity test and the balance sheet test. Both aim to liquidate the estate of the bankrupt company and distribute the proceeds among its debtors. The entire procedure is court-driven, although the 2015 reform has given creditors holding major claims a right to influence the choice of (or a change to) the court-appointed trustee.