Adversely affected by the slump in raw material prices, most African currencies lost over 20% of their value between 2013 and 2016. This had direct consequences for companies, who were confronted by accelerating price rises for imported products, an increase in foreign currency denominated debt and higher costs for international transactions. In addition to currency movements, pressures on foreign exchange have also resulted in liquidity crises and the imposition of capital controls or import licences that have caused disruptions for corporate operations. 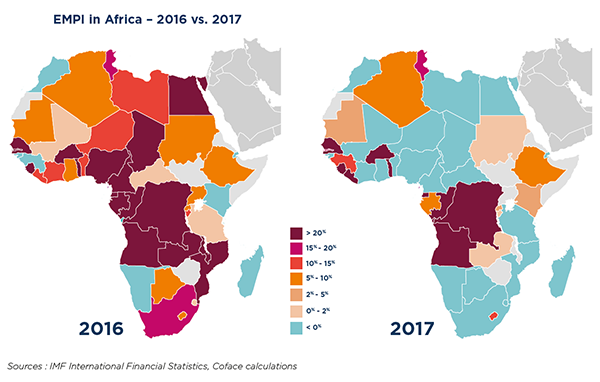 This depreciation began to ease off in 2017 - particularly in Southern Africa (South Africa, Zambia and Mozambique), where there was a relative stabilisation of foreign exchange rates, thanks to the free float exchange rate regime and improvements in the balance of trade. The evolution of the EMPI (exchange market pressure index) shows that, between 2016 and 2017, stress indexes also decreased in countries with less flexible exchange rate regimes, for example, in the West African Economic and Monetary Union . In Nigeria, the sharp drop seen in the EMPI in 2017 was due to the rebound in oil prices and the opening of an investors' and exporters' foreign exchange window in April 2017 which contributed to the gradual recovery of reserves. In North Africa, the situation is divergent. While Algeria and Tunisia remain under pressure, there are improvements in Libya, supported by the resumption of oil production in 2017, and in Egypt where the EMPI (which peaked at nearly 91% at the end of 2016) reported negative values in 2017, following the stabilisation of the pound and an 80% increase in reserves.
Despite this, the legacy imbalances that remain from the 2014-2016 period are still maintaining pressure on certain currencies. Reserves are continuing to decline in Angola (where there is still a gap between the kwanza official rate and the parallel rate) and in the Central African Economic and Monetary Community (where despite relative stabilisation, a devaluation of the CFA franc cannot be definitively ruled out). Tensions remain in countries affected by the Ebola outbreak of 2014, such as Guinea, Liberia and Sierra Leone. In Ethiopia, the persistent current account deficit is exerting pressure on reserves and the currency, which remains overvalued by around 7%.

The median level of foreign exchange reserves has fallen to 3.2 months' cover

Foreign exchange rates have been depleted, as they have been called on extensively to support currencies since 2014. While in 2014 the median level of import cover in African countries was 3.9 months, in 2017 it stood at 3.2 months. Seven additional countries (Zambia, Mozambique, Guinea and the members of CEMAC) saw their reserves fall to below 3 months’ cover. Countries with larger reserves have not remained immune to this trend, as given their reliance on unprocessed raw materials, the decline in reserves can be extremely rapid. This exposes the foreign exchange market to extremely sharp fluctuations. This has been the case, for example, for countries that export agricultural raw materials in the context of relatively low prices. These cash crops include cocoa (Côte d'Ivoire, Ghana, Nigeria and Cameroon), and coffee (Ethiopia, Uganda and Tanzania). Moreover, Africa's particularly serious exposure to climate change is an additional risk factor.
Added to these vulnerabilities are political risks and the accelerated cycle of monetary tightening in the United States which could, once again, intensify capital outflows from the region and consequently increase pressure on exchange rates. 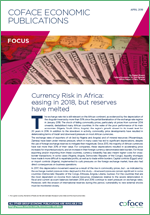 
Panorama: Currency Risk in Africa: easing in 2018, but reserves have melted