Operating performance and progression ofFit to Winin line with plan, confirming our ambition to become the most agile global credit insurer in the industry

Unless otherwise stated, changes are in comparison with 12M 2015

“The second half of 2016 marks the beginning of the transformation of Coface. We delivered a net profit of €41.5m in the year, successfully closed the transfer of our French State export guarantees activity, and launched our 3-year strategic plan, Fit to Win, the implementation of which is now well underway. During the last quarter of 2016 we also finalised the strengthening of our senior leadership team to enable us to drive the rigorous change management necessary to our plan’s success.
With Fit to Win, we aim ultimately to position ourselves to deliver a RoATE (return on average tangible equity) of 9% or above across the cycle. The uncertainty dominating the economy is unlikely to lift in 2017, which will be a transition year as we continue to execute on the strategic priorities that guide the plan: to strengthen our risk management and information, drive operational efficiency and enhance client service, and to implement selective growth strategies.” 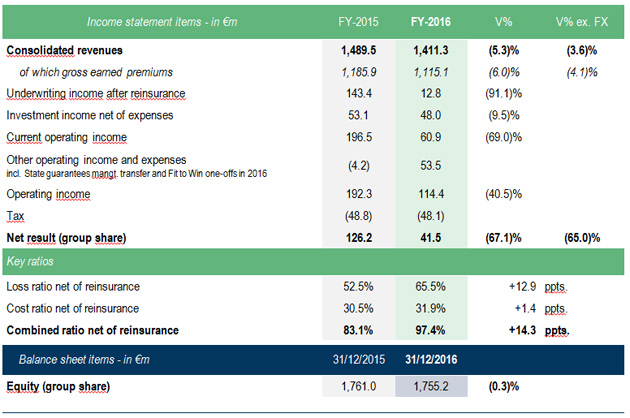 Premiums followed a continuous trend throughout 2016, impacted by weaker client activity and persisting soft conditions in mature markets, particularly in our Northern and Western Europe regions; the latter was also impacted negatively by the decrease in French State export guarantees management fees.

In Central Europe, turnover was down (1.1)% ex. FX, driven by lower services revenues (debt collection fees), in line with the low claims level in this region.

In the Mediterranean & Africa region, good commercial momentum in Italy was offset by premium refunds in Spain, where the risk environment is favourable. Turnover was down (1.3)% against 2015.

In emerging markets, restoring profitability was the number one priority this year: revenue growth was negatively impacted by portfolio adjustments in Asia ((10.9)% ex. FX), whereas some positive re-pricing helped drive an increase in turnover in Latin America (+9.0% ex. FX).

New business production, at €139m, was stable vs. 2015 outside of Asia. Coface’s client retention rate remains close to record levels at 88.5%, a slight improvement compared with 2015. Driven by some re-pricing actions in Latin America, price erosion slowed down compared to 2015 at (1.7)%.

Client activity, a key driver of premium growth, slowed down this year, affected by strong declines in some sectors (metals, commodities…). However, this trend improved slightly towards the end of the year.

Against the backdrop of a volatile and risky environment, Coface’s loss ratio was driven by claims in emerging countries. Measures were taken throughout 2015 and 2016 to reduce our risk exposures in these areas and their effects are expected to materialise gradually.

Net income (group share) stood at €41.5m, to which the above mentioned non-recurring elements contribute for €36.5m .
A distribution of €0.13 per share will be proposed for 2016. In line with previous communication, this distribution comprises €0.07 per share, corresponding to 62% pay-out ratio on adjusted earnings (€0.11 per share) and €0.06 special dividend.

At 31 December 2016, IFRS equity (group share) was €1,755.2m (flat vs 2015). The change in equity is mainly the result of positive net income of €41.5m offset by the distribution of €75.3m to shareholders linked to the FY 2015 dividend and an increase in re-evaluation reserves of financial assets available for sale.

The new regulatory framework Solvency II came into force on 1st January 2016. On the basis of the standard formula, the coverage ratio of required capital to insurance and factoring risk coverage remains strong at c.150% as at 31 December 2016. This level is consistent with the Group’s targeted comfort level and allows Coface to confirm its long term pay-out policy of above 60% of adjusted earnings, as proposed this year.

Ratings agencies Fitch and Moody’s reconfirmed the Group’s ratings (IFS) at respectively AA- and A2 (stable outlook), on 29 September and 28 November 2016.

The Group launched in September 2016 its new strategic plan called Fit to Win, which aims at positioning Coface as the most agile global trade-credit partner in the industry, while evolving to a more capital efficient business model.

The implementation of Fit to Win is currently progressing as planned.

Actions undertaken to strengthen risk management and information are well underway, particularly in emerging markets, including recruitments in the domain of enhanced information, updating of underwriting guidelines and processes, and the setting up of a dedicated senior expert support team. Their effects are expected to fully materialise over the next two years after implementation.

Under this second strategic priority, Coface set out several initiatives in fields such as sourcing and real estate optimisation, rationalising the organisation and reviewing social benefits. Work Councils consultations have been launched and are progressing as planned.

Transforming the Group’s technology and processes in order to improve client service and productivity requires restructuring costs and investments that are fully financed by the non-recurring gain subsequent to the transfer of the French State export guarantees activity. In line with previous communications, €38.6m restructuring costs and €2.1m set-up costs were accounted for in 2016; in 2017 and years following, Coface expects these expenses to amount respectively to €21m, €6m and €3m.

As a result of these actions, Coface is targeting to achieve €10m cost savings in 2017 and €30m in 2018, thus entirely offsetting the loss of margin resulting from the transfer of the French State export guarantees activity.

Prioritising value creation over growth, Coface is adapting its commercial approach to each specific market/sector/customer profile. This translated into some re-pricing actions in Latin America and portfolio restructuring in Asia. In mature markets, where priority is given to efficiency and innovation, Coface is reinforcing account management teams and processes. New partnerships were recently signed with Bank of China, Unicredit and BPCE.

Coface is committed to maintaining a strong capital position, illustrated by a targeted solvency ratio towards the upper end of the 140-160% range, and a minimum single A financial strength rating.
Without compromising these fundamentals, Fit to Win has identified ways to further improve Coface’s capital efficiency, in particular, through the increased use of reinsurance. A first step has been achieved with the increase of the quota-share reinsurance cession to 26% as from 1 January 2017 (vs. 20% in 2016).
The reinsurance cession increase is expected to impact capital needs gradually so as to contribute to Fit to Win’s ambition to achieve 9% or above RoATE across the cycle.

Coface is totally focused on the execution of Fit to Win and the impacts of the initiatives we have now started to implement are expected to materialise gradually.

In 2017, our priority remains to execute our strategic plan while monitoring closely the development of the risk landscape. In line with the first signs of improvement observed at this stage, we anticipate a net loss ratio below 61% in 2017. We expect to begin to benefit from the Fit to Win operational efficiency measures already taken and have planned to achieve €10m costs savings in 2017, while investments and restructuring charges for the year should amount to €21m.