Despite improving economic performances across the Gulf Cooperation Council (GCC), monetary and financial conditions remain tighter compared with before 2015. Access to financing remains one of the key issues for companies, particularly for small- and medium-sized enterprises (SMEs). Loan growth in the region has recovered somewhat thanks to higher oil prices, but it remains below its historical average. Several factors have contributed to this, such as higher energy prices, which resulted in governments withdrawing the emergency funds they injected when oil prices slumped. The US Federal Reserve’s (Fed) policy normalisation is another cause: since the Fed announced its policy normalisation in 2013, central banks across the GCC have increased their policy rates in line with the Fed’s exit strategy. These tight bank credit conditions have forced companies to look for alternative financing sources in recent years, such as bond and sukuk issuances, trade finance, and initial public offerings. But despite their fast growth, these different sources of financing account for no more than around 5% of usual bank credit.
GCC companies are now looking forward to the expected expansionary monetary policy in the US, which should help them.

Loan growth is back but remains restrained

As is often the case, the main question mark for GCC banks concerns the price of oil (Coface's reference scenario is USD 65 per barrel of Brent).
With rising oil prices and improved growth, private sector lending in the GCC region as a whole is expected to increase by only 5% in 2019, well below the 9% average recorded between 2013 and 2015. The Institute of International Finance (IIF) credit distribution survey shows weak loan growth in the coming quarters: banks continued to tighten credit conditions in the Middle East and North Africa region in the first quarter of 2019.
The data on money supply in the GCC show the same dynamic: positive but weak growth. Fed policies and oil prices play an important role in the liquidity conditions of the GCC banking sector. GCC countries (except Kuwait) follow a fixed exchange rate regime, pegging their currencies to the US dollar.
Looking ahead, the new stance of U.S. monetary policy (against the backdrop of slowing economic growth in the United States) should support credit growth in the GCC countries.

The recovery in oil prices is helping, but volatility is a challenge

Although the GCC countries have made significant progress in diversifying their economies away from oil, oil still accounts for the largest share of their fiscal revenues (in 2018, hydrocarbon revenues as a percentage of total fiscal revenues amounted to about 70 percent in Saudi Arabia, 80 percent in Oman and Bahrain, 60 percent in Kuwait and Qatar, and 55 percent in the UAE). 2
Currently, higher oil prices provide security for banks, but the volatility surrounding them remains a risk, especially given the decisions of some GCC governments to ease some fiscal austerity measures.

The gradual and moderate growth in lending and tighter liquidity conditions compared to the period before 2015 have increased the importance of other sources of financing for businesses. The issuance of sukuk bonds and certificates is part of this alternative financing.
The GCC bond debt market faces some challenges. The continuation of infrastructure and construction projects remains vital as they are an important pillar of economic diversification and support project financing needs, as well as the increasing openness of markets to international investors or even the increasing knowledge of this financial instruments. 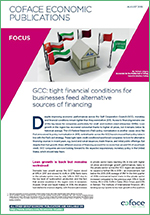