Morocco: payment delays are improving but remain too long

Coface's fourth survey on payment terms in Morocco shows a situation that remains worrying despite a slight improvement.

Coface presents its fourth survey on the payment behavior of companies in Morocco. Carried out at the beginning of 2019, this survey aims to monitor the evolution of payment terms and delays between the various Moroccan economic actors.

Moving from an average of 99 to 93 days, contractual payment terms remain long and widespread. Nearly half of those surveyed said they had experienced delays of more than 180 days.

The maximum legal time limit of between 60 and 90 days is therefore far exceeded. But it should be noted that companies have noticed an improvement over the last six months, with a special mention for government services and public companies, who are proving to be better payers.

It should be noted that for 80% of companies, no late payment penalties are implemented.

A climate between caution and optimism

The majority of companies believe that payment delays will remain stable over the next six months, but a third expect even longer delays.

The evolution of the Moroccan economic context as a whole is seen as problematic, with 48% of respondents who believe that it will deteriorate. But when asked about their own evolution, 58% of companies think that their turnover will increase, and their cash flow will stabilize. The same proportion plans to invest in the next six months. 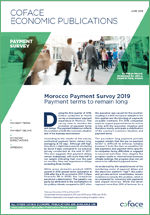