The Turkish economy - what to expect in 2014

- External deficit expected to narrow in2014, inline with slower growth

- Inflation above the Central Bank’s year-end target, due to the lira’s depreciation and high food prices

- Political risks to be monitored in the period ahead

Corporate risks under pressure in 2014

In 2013,Turkey’s economy posted a strong growth of 4% on the back of buoyant domestic demand. Consumption and investment expenditures contributed 3.7 points and 1.1 points respectively to the country’s annual growth. Net exports, however, dragged down the growth rate by 2.3 points as the strong domestic demand boosted imports. High food prices, strong domestic demand and the sharp depreciation of the lira at the end of 2013 caused inflation to rise to 7.4 %, higher than the Central Bank’s target of 5 %.

Prior to the forthcoming presidential elections in August 2014, Coface is cautious in its assessment of corporate risks inTurkey. If political tensions rise again, as happened in December and January, investors may flee the country which could result in a fluctuation in Forex markets. Such a situation would negatively impact the corporate sector’s external debt stock, already at a record high.

In 2014, growth is expected to weaken as the domestic demand decelerates due to higher interest rates and  restrictions aimed at curbing excessive loan growth. Unemployment is expected to rise in the short and medium term, in line with the economic slowdown. The sharp depreciation of the lira during the December-January period, along with the increase in borrowing costs, create risks on the private sector through higher production costs and smaller profit margins. 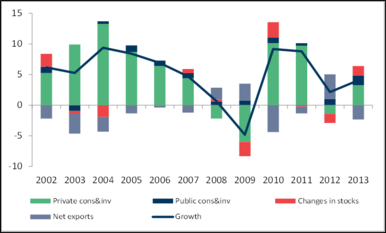 Taking these factors into consideration, in March Coface placed a negative watch on the A4 country risk assessment of Turkey.

“Under these circumstances, the risks for industries whose activities are mainly driven by  local demand would be higher. Externally-oriented industries will be in a more advantageous situation, benefiting from the recovery inEurope-Turkey’s main trading partner, and a weaker lira”, said Seltem Iyigun, Economist for the MENA at Coface.

The slowdown in domestic demand and the increase in interest rates are expected to negatively affect the construction sector. During the first quarter, housing sales remained stronger than expected with a fall of 6 percent compared to the same quarter of 2013. However, the share of houses financed by a mortgage fell by 30 percent during the same period. Over the short to medium term, the rise in interest rates could put pressure on sales. This, in turn, may have an adverse impact on industries working closely with the construction sector such as cement, metals, steel and white goods etc.

The lira’s depreciation constitutes an advantage for the textile and clothing sectors, as their products will become more competitive compared to those of their peers. These sectors already enjoy the benefit of proximity to European countries (their main clients), strong capabilities and a huge machinery park. Initial data shows that the recovery inEuropesupportedTurkey’s textile and clothing exports to the region. As theUnited Statesand the European Union consider signing up a trade and investment partnership agreement, investing inEastern Europecould be a relevant strategy for Turkish producers, as this would allow them to export to theUnited Stateswhile being exempt from custom duties. In 2014, the exports would compensate for the slowdown in domestic demand. The volatility of exchange rates and raw material prices remain major risks for these sectors. Branding and research and development efforts are the key elements that need to be considered for the progress of these industries over the medium to long term.

Restrictions on consumer loans, tax increases and the lira’s depreciation are likely to damage  domestic sales of the automotive industry. Sales of light commercial vehicles and passenger cars plunged by 25.5 percent over the January-April period compared to the same period in 2013. However the recovery in European markets and the lira’s depreciation are expected to support exports, which rose by 4 percent year on year. Any alleviation of tax burdens would help the industry to benefit more from the strong potential in domestic market - an important factor for improving export performance.