The “Made in Russia” strategy: a limited instrument for economic diversification

Thanks to the efforts of the authorities, the diversification of the Russian economy is progressing, particularly in certain sectors such as information technology, pharmaceuticals, the automotive industry and the agrifood sector. In the latter case, the process was encouraged by Russian counter-sanctions adopted as a response to Western sanctions. Economic diversification is regarded as a way to simultaneously reduce the country’s dependence on imports and on hydrocarbons. However, the diversification faces structural barriers. It is subject to the availability of inputs, the modernization of the productive apparatus and the improvement of the business environment. The requirement to substitute local production for imports and or increase local content is limited by the availability and quality of local components. Additionally, the development and modernization of local production chains very often require the import of machinery and technology from Western countries.

The current and, potentially future sanctions and counter-sanctions, the business environment (rated B by Coface, 5th notch on a scale of 8), the increasing political risk and the lack of available workforce weigh on domestic and foreign investments. In addition, raw materials (including hydrocarbons) still play an important role in the economy in spite of a weaker link between oil prices and economic growth. This is a result of the new fiscal rule aimed at disconnecting the economy from fluctuations in the oil environment and the growing influence of the political context on capital flows at the expense of crude oil prices. 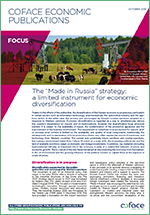 Download this publication : The “Made in Russia” strategy: a limited instrument for economic d... (741.82 kB)


Press Release: The "Made in Russia" strategy: a limited instrument for economic diversification